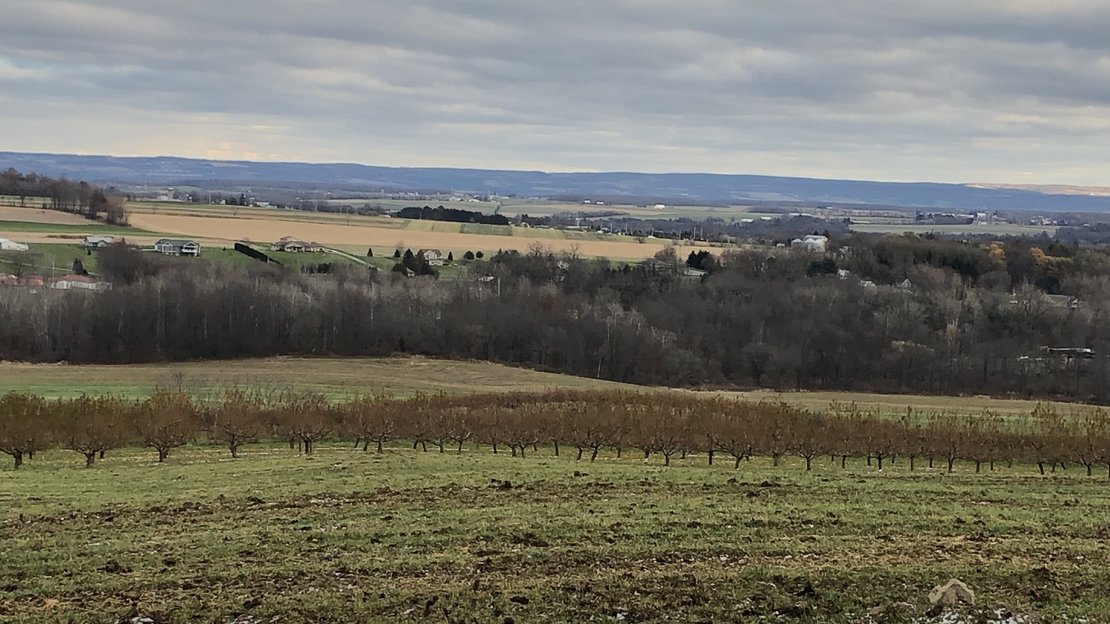 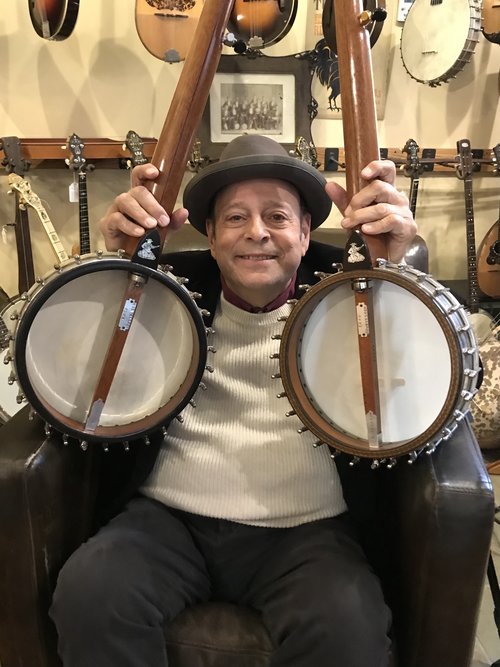 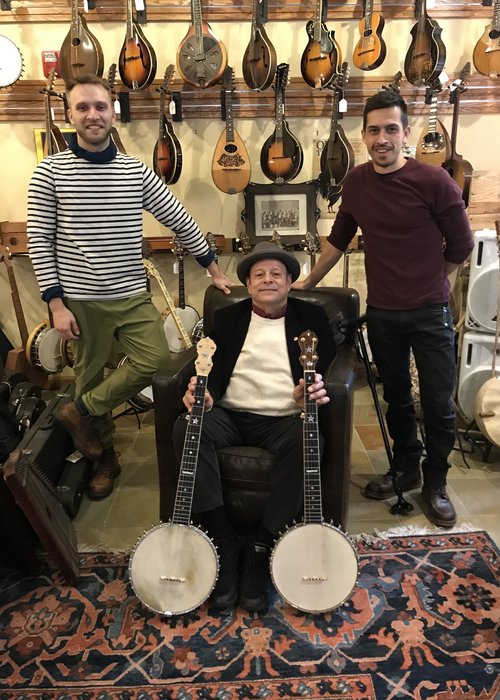 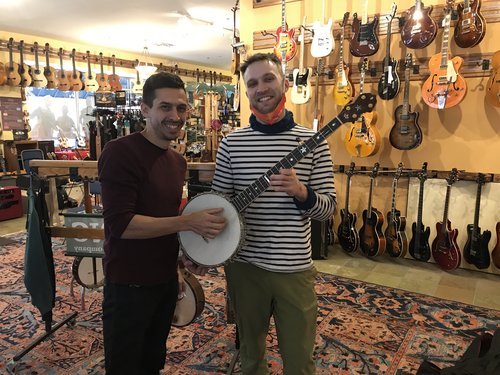 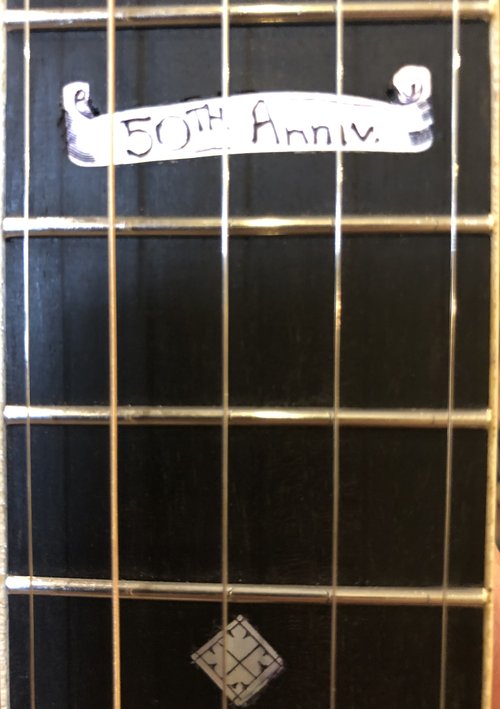 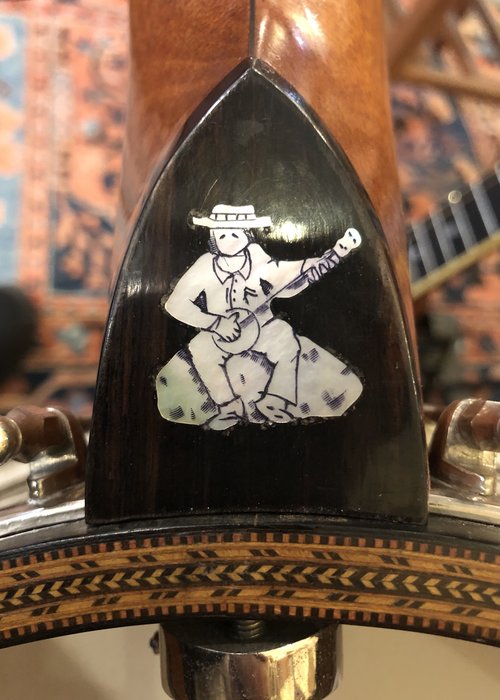 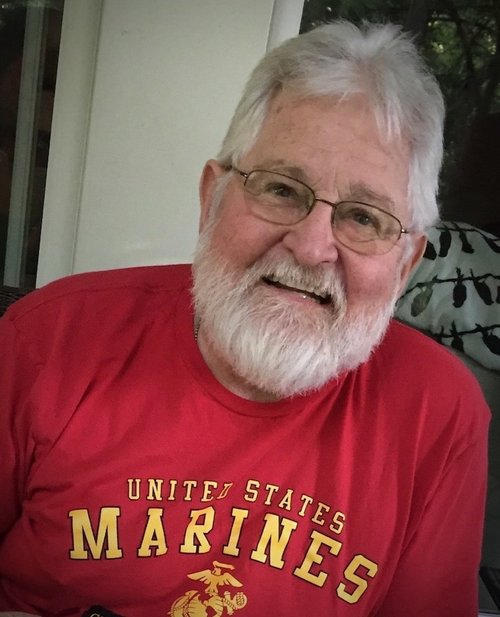 This past Saturday was a very special day. I was presented with two banjos that were created in collaboration with Robert Mortillaro, our former repair technician and Ryan Yarmel, our store manager. They had been discussing the idea of a limited number of banjos to commemorate my 50th anniversary of banjo life. Yes, 1972 will mark the 50th anniversary of my first banjo acquisition…."Norma". Well, I’ve come along way from Norma with probably close to 20,000 banjos under my belt. The boys thought a way to celebrate would be for Robbie to build two custom necks on vintage rims that would celebrate this milestone. These two wonderful banjos will be offered for sale in the coming year. I thought I would give a little sneak preview in the pictures. They are consummate players and I’m proud to have them in our inventory.

On a sadder note, I received a notification via Facebook messenger that a friend from my youth, had passed away. There’s an interesting story behind our friendship and I thought I relate it here. Bill Burke was my neighbor…he lived just a few houses away from me. We were the same age but we went to different high schools as I had gone to McQuaid Jesuit High School and he went to Webster Central. Bill and I didn’t interact very much but we were friendly and I had a secret crush on his sister. But one hot steamy summer night, after we had graduated from high school, I had an interaction with Bill that left a lasting mark. I had had a very traumatic event happen to me, about which I won’t go into detail, but I needed to talk to somebody and there was no one in my house I could really discuss this with. As I was driving home, I saw Bill was outside working on his car and I pulled into his driveway. We had a long heart-to-heart talk until late in the evening. Bill was very open and understanding with his advice and even though we weren’t close friends he treated me as somebody very important. That fall I was heading for college and Bill was headed for Vietnam. There couldn’t been two 18 year olds that were any more disparate….a future patriot and a future old hippie. I never saw Bill again after that night and when I received word of his passing, it brought back a flood of memories. He was someone I had confided some of my deepest feelings. In life, he had gone on to become the complete the opposite of me and yet there was that common bond in 1965. As so many of us have been driven apart over these past years perhaps we should look at each other and ask what we have in common, what can we share… not how we are different. Frankly, in the end we all will be in the same place it’s just a matter of time. 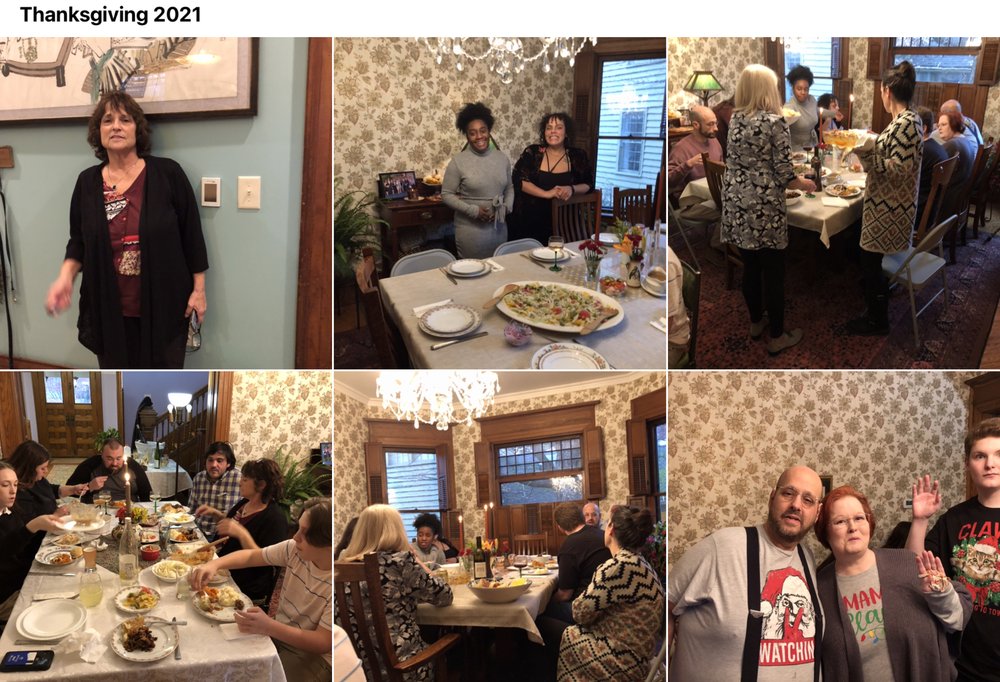 This Thanksgiving we celebrated at our house in Penn Yan. We got together with a very diverse crowd of family and friends. For the first time in many years we were together with my sister Liz and my brother Sam. I really tried to take my own advice and listen to their stories. It is so fascinating that both of these siblings, the youngest of six, are in the field of health care. Instead of sitting around like I usually do and tell people about all the things I’ve done, and places I’ve gone,  I tried to listen to them. My brother is in charge of 25 patients in an assisted living facility and my sister works with disabled adults in a group home. There are not enough rewards to bestow on these two for their service to our community and yet they seldom get the recognition that they deserve. I was glad to have them at my table for Thanksgiving and listen to their stories. 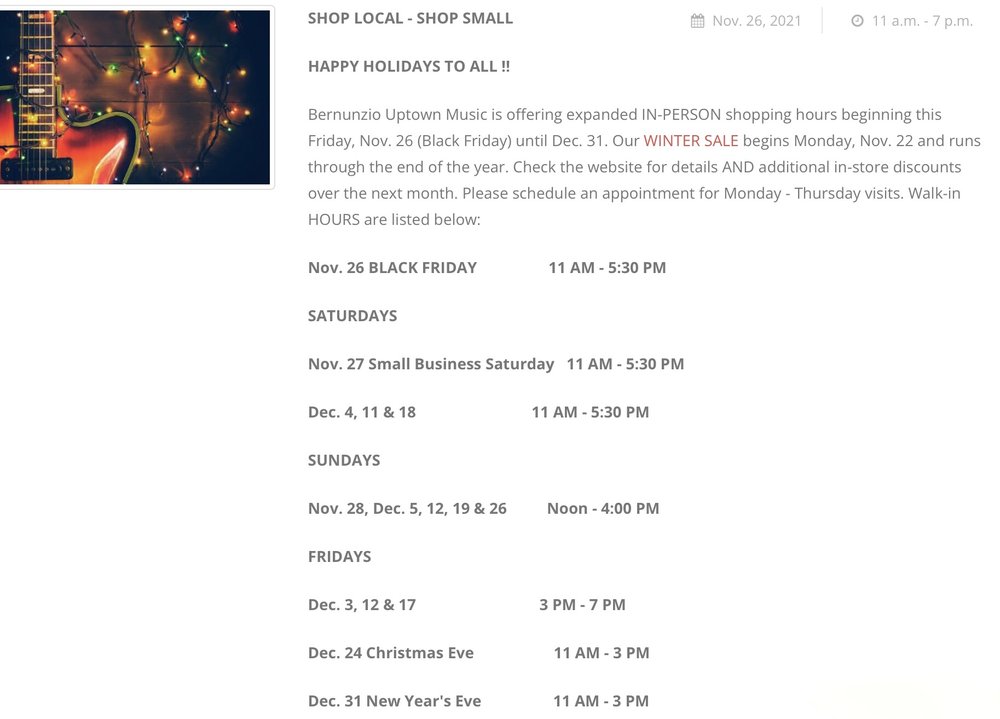 Our winter sale has been off to an unbelievable start. Ryan and Sam have reduced the prices on hundreds of instruments and are moving things out in a way I’ve never seen before. We are open for limited hours during the holiday season. The complete schedule is shown above.