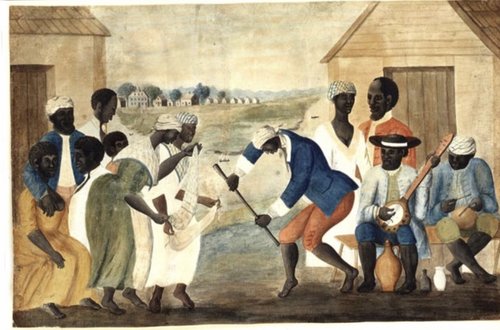 Without paintings like this, which speak to a very offensive time, we would not know where our music came from. 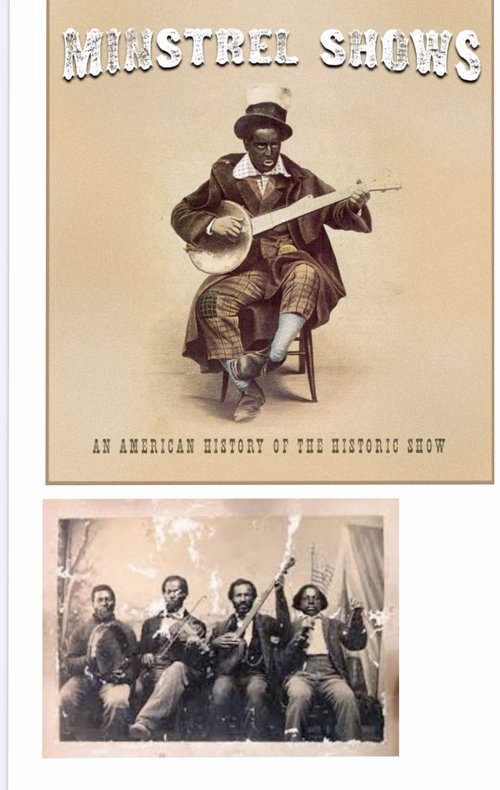 Minstrel shows were actually a way that African-Americans were making money. When the money started coming in, white entrepreneurs took it away from them, blackened their own faces. That was America’s music. America’s Entertainment Businesses needs to pay a big debt to the community that inspired so much its prosperity.

Early painting by William Sydney Mount of a minstrel player and above that a modern African player Daniel Jatta, master of the Akonting, the historical ancestor of the Banjo. 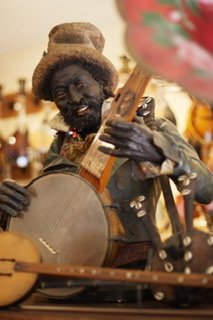 The last statue left in our collection. This statue is from the 1890s. It was made in Vienna, Austria. It’s depiction is a little more noble as minstrelsy was also taken overseas where it was looked upon in a little different way than in America.

I have heard the outcries from our community my entire life. This is not to say that I do not bear the same guilt or am any less innocent of racism or white privilege than anyone else. When I was born, my grandparents and parents lived in a small Italian enclave in what is now the Marketview Heights area of the city of Rochester. Today this is an area of homes that have an average value of only $40,000 because the neighborhood is shattered. My family moved to the suburbs by the 1950s. I ashamedly must admit that I heard talk that the "colored" people were coming and we need to move because it was going to be dangerous. Now my parents were not openly bigoted but attitudes are shaped at a young age. I always felt we should’ve understood more because we were victims of prejudice at the hands of those who left the crumbling neighborhood to us. Ironically, when my parents moved to their dream house in the suburbs, I was not accepted in the neighborhood. I was not allowed to play with any of the children because I was different. Really, that is what prejudice is about.....being different. We are afraid of what is different and therein lies the beginnings of the word to "prejudge".

In the 1960s, I was able to attend the prestigious McQuaid Jesuit High School in the suburbs. There was only one black student in the entire school of eight hundred. I remember certain people on the football team hitting him extra hard because they said he didn’t belong. He ended up becoming the greatest Cross Country runner in the school’s history. That school also inspired me with ideas from books that would shaped my opinion regarding stereotypes and the unfair situations in Black America. From high school to college it was once again an all white experience. I member being deservedly embarrassed when I met a young black man who was a freshman. He was tall and a bit gangly and I asked him what position he played on the basketball team? He looked at me very blankly and said "Position, I’m here to study early British literature"! I realize then that I was still certainly a racist. I went on to teach school for 20 years in a mostly white setting but I would have a few black students and for some reason they were always my favorite people. Since I taught kids who were handicapped, that is they had learning disabilities, once one asked me "since we are handicapped Mr. B, when we learn to drive can we get one of those stickers that let us park in special spots!" Nate Harvey where are you today? I loved those kids.

Of course many of you know of the story of the banjo and how it led to the music business that I’m in now. But, at times, the banjo has gotten me in trouble, especially with the black community in this town. After I purchased a large part of the famous Tsumura collection I had a considerable amount of statues and ephemera... some of very questionable taste. I sold them off but kept a few. You may remember a few years ago that I was called out for having some of those statues in my store. Someone came in, filmed them and shouted out that I was racist slandering Black people and doing business close to the esteemed Eastman School of Music. He posted the video to Facebook. I contacted him and I tried to explain to him that the statue had a sign around it that said "if you want to know about the history of this please ask John". The purpose of bringing the statue to the store was to the open the dialogue, to understand the history behind the statue and to grimace when we saw it, not snicker. We had community forum together with a local Black organization and university some professors. I made a link to that talk if you were interested in reading it.

The rewriting of history should be done so that people can understand all sides of an issue. It should open doors not close them. Making things disappear does not to absolve the guilty and only makes the crimes of the past disappear. I witnessed the rewriting of history all throughout Sicily. The island is rife with examples of one civilization stepping on the next and tearing down images and rebuilding over the course of thousands of years. Which brings me to the topic of Aunt Jemima. A major corporation has been using this brand for it’s product for 130 years...and now, with the flick of a little artwork Aunt Jemima will be "white washed", and the big corporation will get a feather in its cap and say it did something for black lives matter. Well, what I feel is that that company made billions and billions of dollars over 130 years....and only that brand....there are MANY, MANY others. "Keep the brand send  the money" is what the community should be saying. The same goes for the music industry which treated black people as inferior and has its entire success based on the music of African-Americans. That has made a lot of money. The question is how can it be paid back? At some point America must make amends for the sin of slavery and for the continuation segregation for 150 years after it ended. It’s a touchy subject but I believe that recompense must be made in terms of education and housing that will lead to equity in America. Not the type of housing that was built in the 60s that was “Urban Renewal” a boom for local contractors and “free” housing that led to no wealth building except for those contractors. How about restoring the houses in that Market View Heights neighborhood and offering a path to ownership rather that dependency. These ideas should be funded by the corporations that have made the money over the years marketing stereotypes. Any package of recompense should also include our universities paving the way for free advanced education anyone tracing their ancestry back to slavery. Do this for 100 years and see if people get a chance to catch up. I feel desperately that if our species is to survive we have to stop categorizing each other and we need to start loving and understanding and accepting each other....and somehow make recompense for the past. 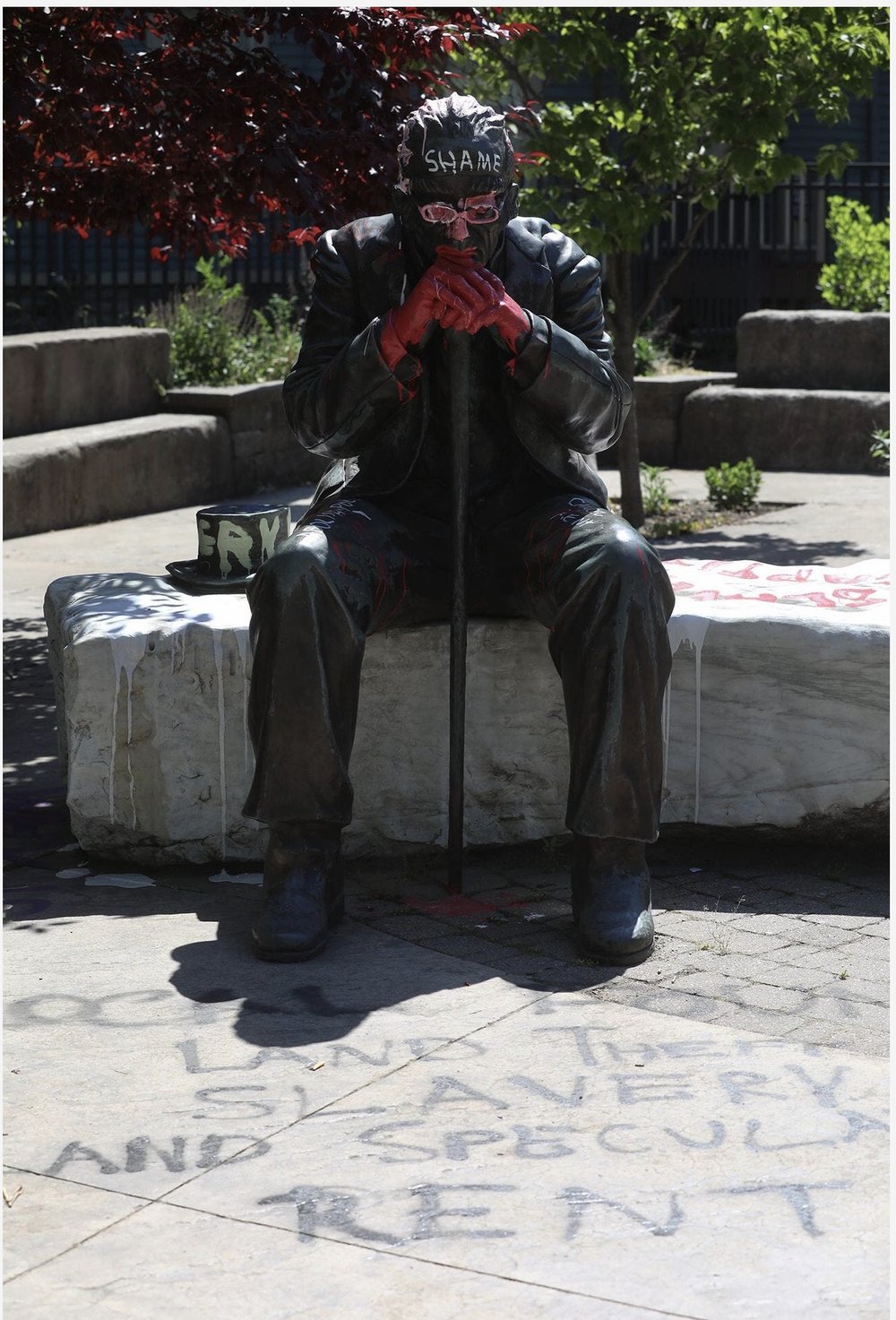 This week the statue of Nathaniel Rochester, in a quiet little park in the south wedge district of Rochester, was vandalized. The founder of Rochester did own slaves....Nathaniel Rochester was a very imperfect man and the statue in no way glorified him.... It was a rather contemplative statue.....of an old man looking back on his life. The statue is located in small pocket park that was once a drug dealing corner and converted into a peaceful garden. The rewriting of history should be done so that people can understand all sides of an issue. It should open doors not close them. Making things disappear does not to absolve the guilty and only makes the crimes of the past disappear.