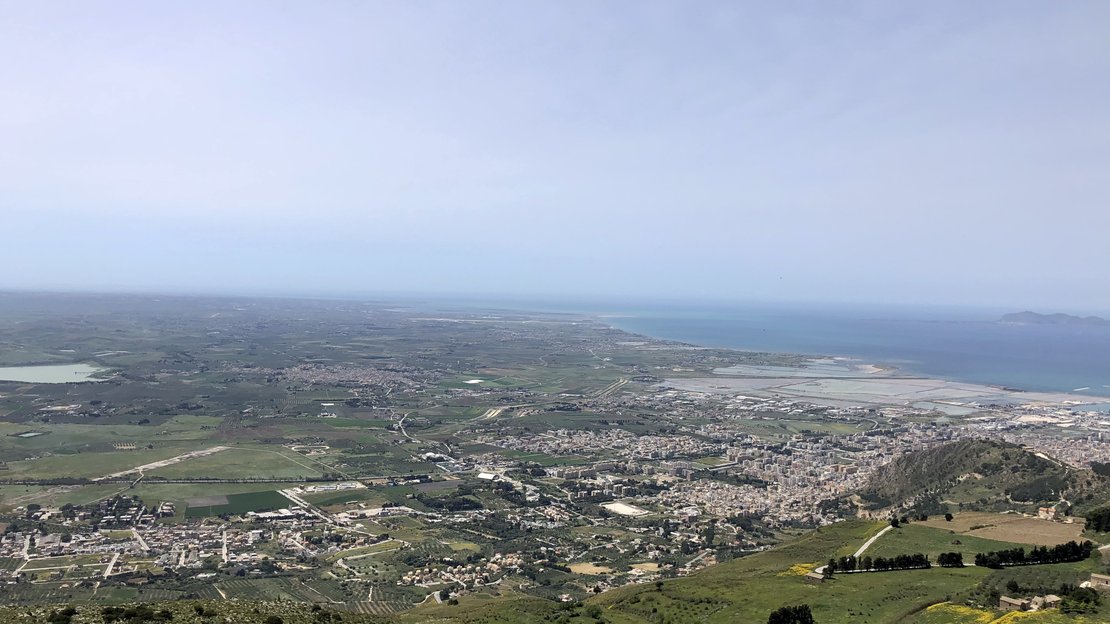 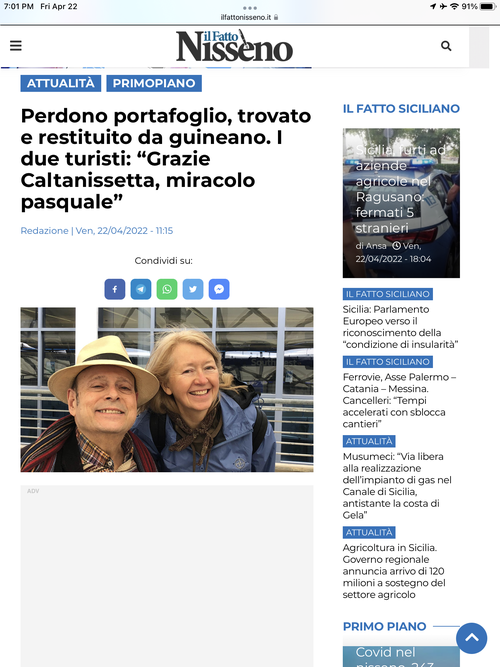 This was the headline in the local newspaper 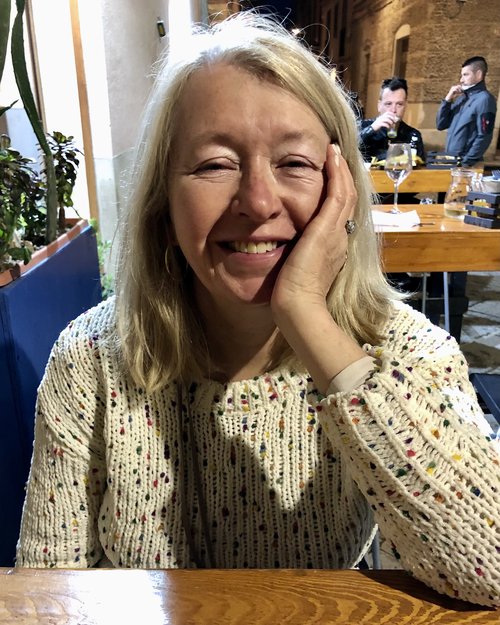 This amazing woman has done ALL the driving, planning and has given me wonderful 35th anniversary. 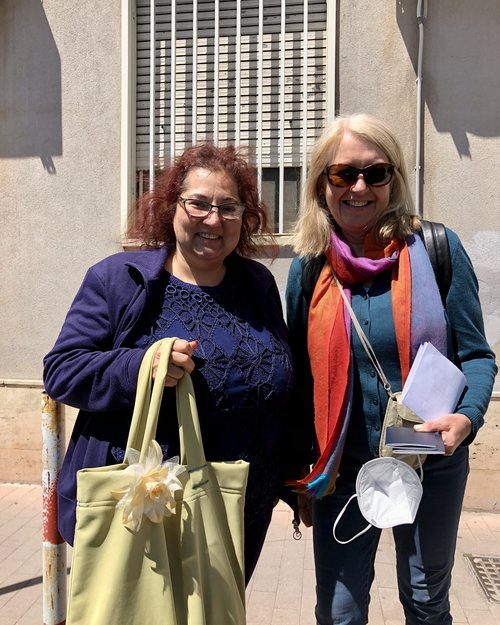 Julie and Roberta Vitale…all smiles after retrieving our passports. 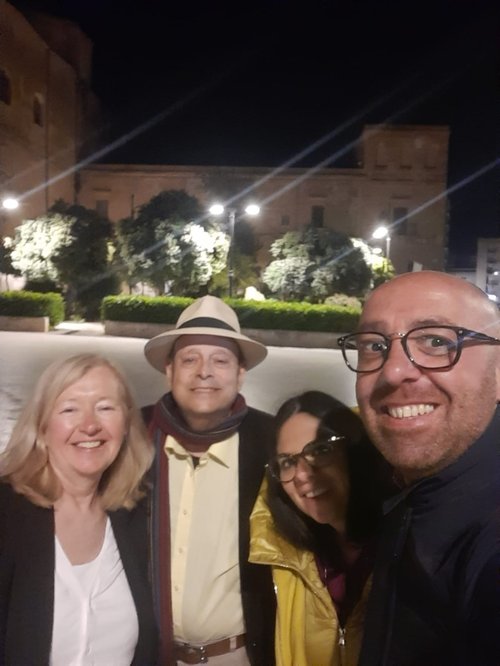 Our travel agents, Giuseppe and Claudia LeMarca of Evolution Travel did SO MUCH for us, we cannot thank them enough. 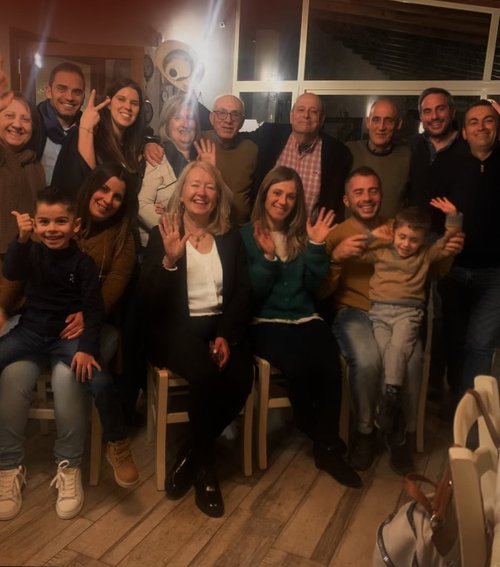 Family is more that just a shared name…the way these folks treated Julie and me was as genuine as any family members can be.

Angelo Bernunzio is my new attorney in Sicily!!! 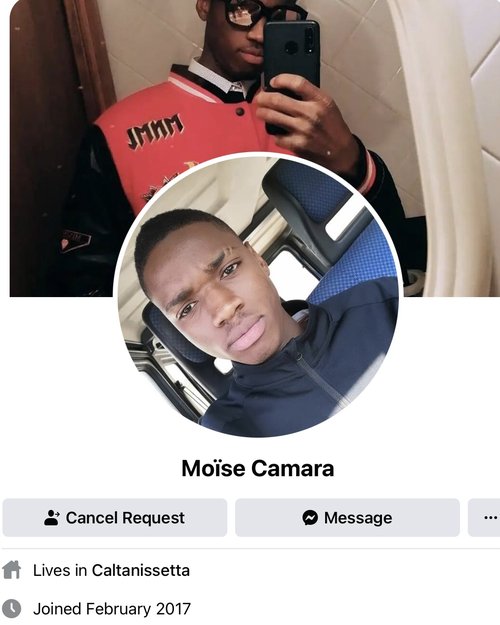 Sicily has long been a refuge for the oppressed and has had a tradition of welcoming people in need. Over the past years there have been people from Africa landing on the shores and making a home for themselves in this remarkable land. I have a NEW FRIEND!!!

Today we leave Sicily and head for The Hague for a week, before returning home. Yet Sicily has become more like home each time we visit. This past week we had an amazing occurrence and I will relate the story here. On Easter Sunday morning we realized that we had misplaced a small travel purse containing our passports, Julie’s driver license, credit card and cash. We frantically searched the room, the hotel and the street …to no avail. We contacted our relatives, our travel agents Giuseppe and Claudia LaMarca and the translator, Roberta Vitale to see if they could help. Everyone did what they could but it seemed hopeless. Eventually we were going to have to interrupt our vacation and return to the embassy in Palermo to get temporary documents…if we could. We attended the joyful Easter Sunday service at the cathedral and Julie told me she said a little prayer. On Monday, after reporting the events to the police, we decided to proceed to the next leg of our trip in the town of Sciacca where we would fill our all the forms at the local Police department and get the process started for new documents. While we were at the station a text came in that everything was found and returned to the police station in Caltanissetta! Of course we had to drive back an hour and a half each way through the Sicilian countryside to get our documents back but everything was returned including the credit cards, the passports, and even the cash. But there’s more to the story! The next day this story, with our pictures appeared in the local newspaper. And here it is.

CALTANISSETTA - A BEAUTIFUL  STORY, A NOVEL ABOUT A POSITIVE LIFE, A PLOT WORTHY OF A GOOD FILM WITH THE NISSENO CAPITOL AS ITS EPICENTER.

The incident on Easter Monday in Caltanissetta, Monday 18 April, when a 20-year-old citizen of Guinean nationality, residing in the Nisseno capital, came to the police station to deliver a lost wallet, recovered shortly before by the same in via Kennedy.

Money, documents, credit cards that represented a piece of the life of two foreigners. Here, yet another twist, because the tourist's father is originally from Barrafranca, this is the reason why the couple had chosen the Sicilian hinterland to celebrate their 35th wedding anniversary. A dream that was about to turn into a nightmare when they realized they had lost their wallet. The happy ending arrives, but the two tourists John and Julie Bernunzio, with a letter to our newspaper, wanted to thank the young Guinean, the Sicilians and Sicily. A "special" thanks go to Caltanissetta and the Cathedral.

Here is the content of the letter:
I would like to comment on an article that was published in your newspaper and that someone shared with me. The article was about a young Guinean boy who had found lost documents. On the occasion of our 35th wedding anniversary, my wife Julie and I chose to come to Sicily given the Sicilian origins of my father from the Barrafranca area, we were very excited because we met some hypothetical family people because they have the same surname. We have been in Caltanissetta for four days and we are seasoned travelers and we have been to Europe many times, but, this is the first time that something really bad has happened to us; we lost our passports, credit card, driver's license and some cash, it was the worst nightmare a traveler could face. We contacted our family, friends and an excellent translator Ms Roberta and our travel agents Claudia and Giuseppe Romano La Marca, all of whom contributed to the disclosure and reporting of the unfortunate event to the police station. But the one who deserves the most thanks is the young Guinean who brought back everything without missing anything.

We could never thank him enough for this Easter miracle, my wife had prayed during the Holy Mass in the Cathedral and her prayers were answered.
Thanks Caltanissetta, thanks Sicily John and Julie Bernunzio 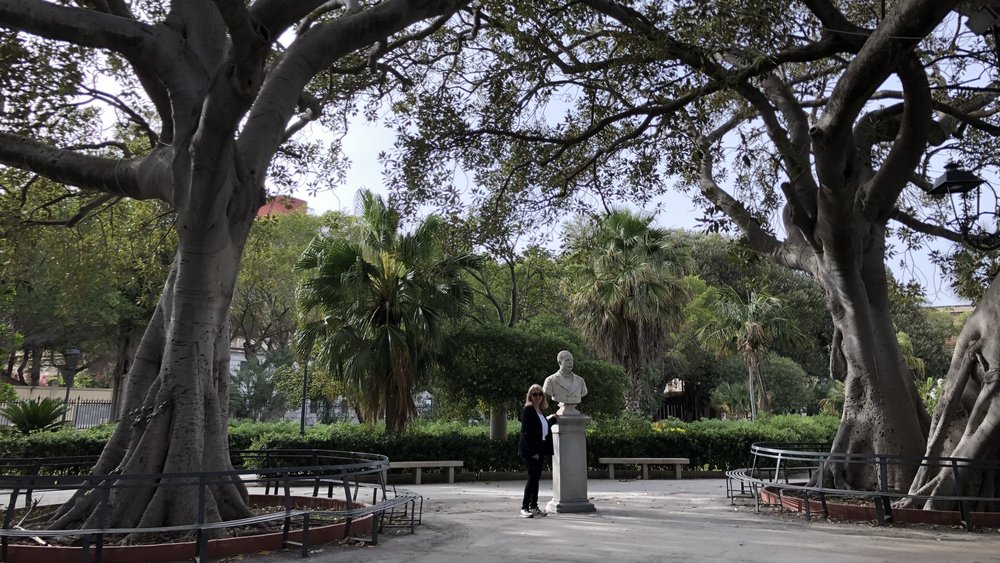 Julie in the lovely park in Trapani 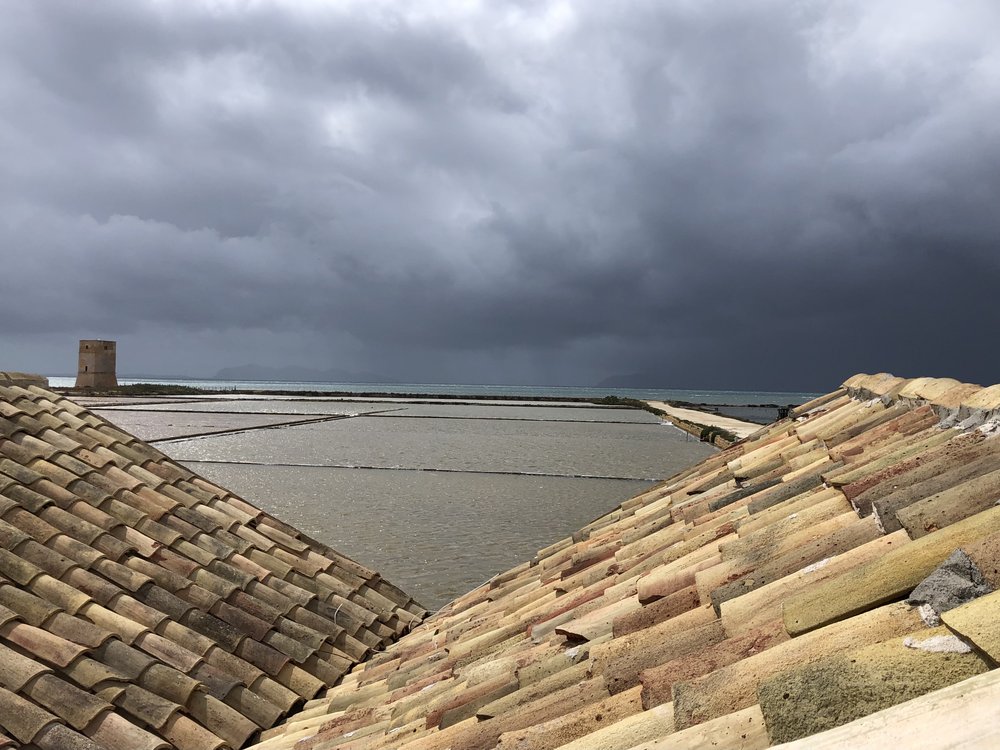 at the salt museum 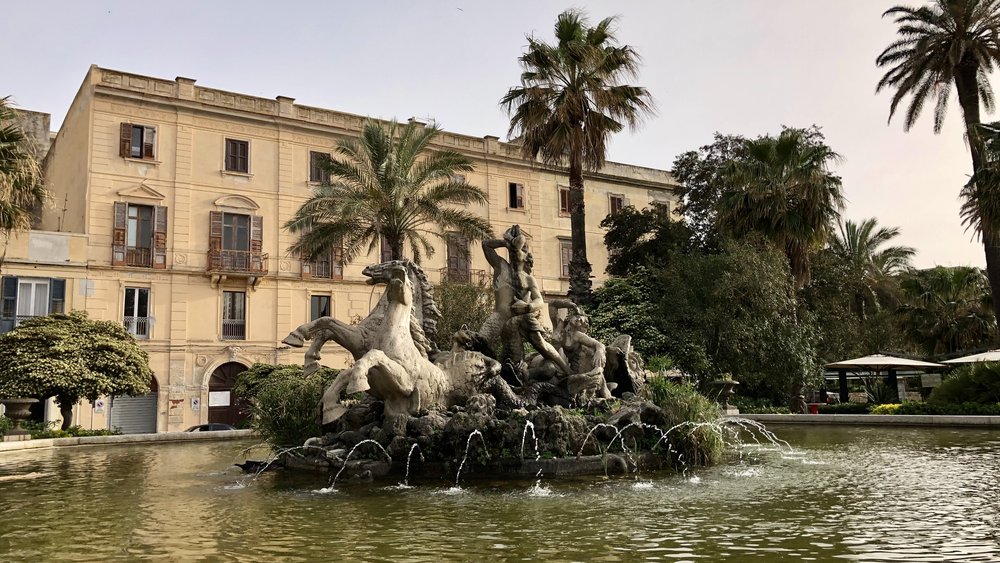 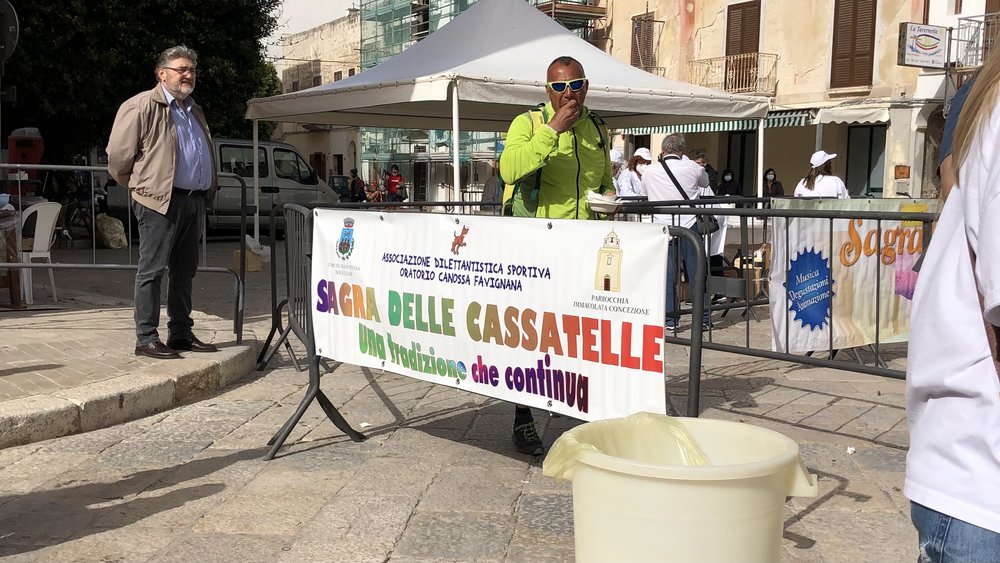