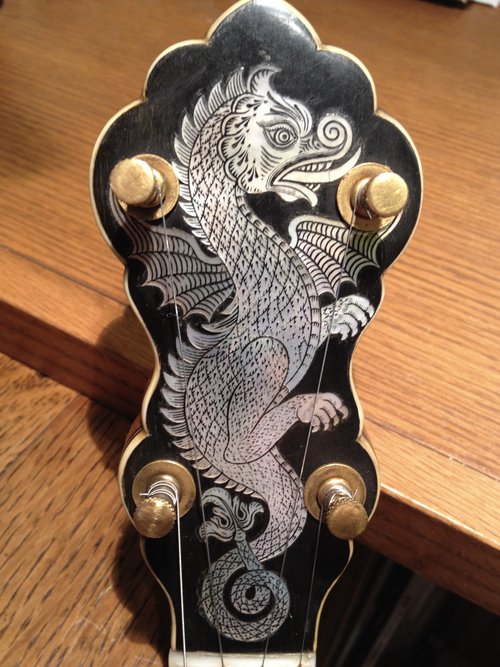 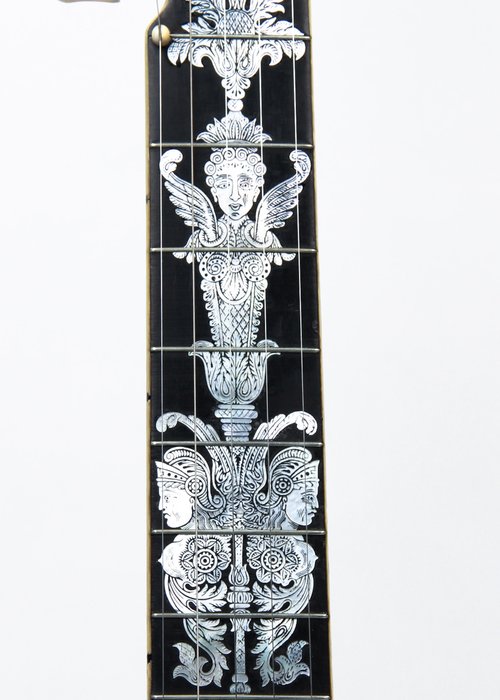 Centurions with breasts is some thing that I’ve never seen in mythology. 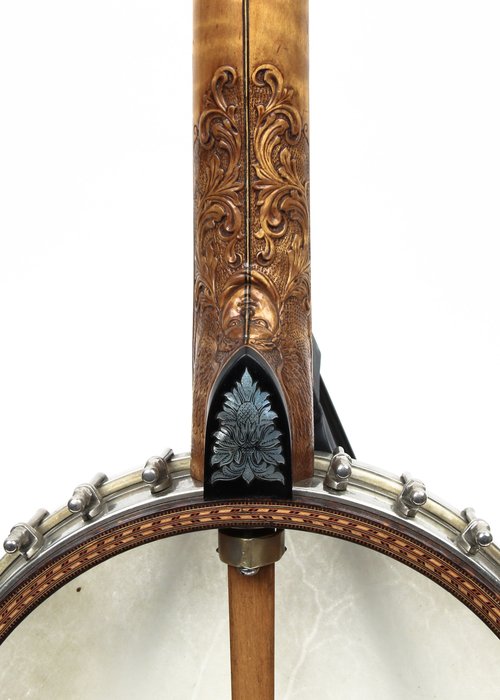 A winged angel is carved into the maple neck and the heel.

This is the poster we made of the banjo that we still sell today. 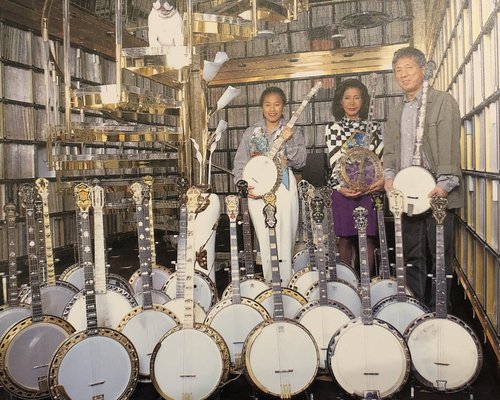 The greatest banjo story ever told

The snowy drive to Rochester this past Saturday got me thinking about a banjo that I once owned. Julie and I reminisced at length during the blizzard and the memories came flooding back. Around thirty years ago I had left a secure teaching career and was making my way through the mirage of reinventing myself as a "vintage instrument dealer". I had never thought of myself as a businessman, but I just loved the fact that I could make a living being around something that was meaningful and passionate to me. Julie and I worked out of our garage that was connected to the house in Penfield and we packed and shipped everything we sold. Life was simple.

One day I received a call from a gentleman on the West Coast. He recently opened the store in a place that had formally specialized in Bluegrass instruments. He said a woman had brought in the fanciest banjo ever made and it was once owned by Irving Berlin. I asked for some some pictures but when they arrived they were dismal Polaroids which vaguely showed a very fancy Fairbanks banjo with inlay throughout the whole neck. He explained the woman had brought it in and her family have gotten it from Berlin but she couldn’t find the photos of him with the banjo. Now I really had no idea the value to place on this banjo. I had sold many banjos in the past to collectors around the world but something like this was in a class of its own. I had no idea what to pay for it, let alone price it for resale. I just knew that I had to have it. When we started talking price, he asked me to make an offer. He had offered it to a few other "prominent" dealers around the country and was waiting to hear from them. I was very adamant that I was not going to get in a bidding war with other dealers. I took a deep breath and said I would pay $12,000 for this banjo which was more than I had paid for any instrument ever. I don’t know where I came up with that figure; I just looked at my bank account and said that’s what I could pay. There was a long pause at the other end of the line and the dealer asked me a strange question. He said to me, "Are you Italian?" A bit taken aback, I answered "YES". Then he said "well those other guys have never, ever given me the time of day. I’m probably the only Hispanic vintage guitar dealer in the country. I’m going to sell it to you". I sent a check that same day.

When the banjo arrived we were stunned at the actual beauty of the inlay work which must have been done by the mysterious 1902 engraver, now confirmed to be Icilio Consalvi. The peghead was adorned with the fabled "Chubby Dragon" which appeared on some of the highest grade Bacon Professional banjos made by A. C. Fairbanks. The fingerboard is inlayed with continuous engraved pearl in the Art Nouveau style with angels, dragons, centurions and florals. The heel of the maple neck is carved with a winged angel. However, this banjo had suffered a crack to the back of the peghead and the repair looked as though it was done at the factory. Additionally the rim was changed out from the original Whyte Laydie style to the more "modern" Tubaphone. The dowel stick bore the A. C. Fairbanks plate and the Tubaphone stamp on one side and the Whyte Laydie stamp on the other side. The serial numbers on the rim and stick matched and they dated to 1902. We can only presume that this banjo went back to the factory sometime around 1909. There were a lot questions that I needed to resolve. The next weekend I drove down to the Philadelphia Guitar Show. Several prominent dealers and collectors would be there and I thought I could show it to them and read their reactions. When I brought it out at the show by the looks on the faces of those dealers and collectors I could tell that I had something extremely rare. Prices were bantered around but in the end it was up to me to decide the final value.

As I drove home I thought all the way that I should offer it first to the great collector and my number one customer, Akira Tsumura. He had bought hundreds of banjos from me over the years and he was planning on putting a large book together in entitled "1001 Banjos". Now 30 years ago the technology was nowhere what it is today. We talked briefly on the phone about getting some pictures together for Mr. Tsumura but then I had the clever idea of making a photocopy of the fingerboard and then sending it to him by FAX as we spoke on the phone. As the paper slowly chugged through the machine, I could hear the excitement in his voice. When he asked me about the price I took a deep breath and said, "Well you’ve paid $100,000 for a Martin D-45 and there’s 91 of them and this is the rarest banjo in existence so I want $100,000". There was a long silence at the other end of the phone and his assistant picked it up. He started yelling at me and said no banjo is worth $100,000. He said the most we would pay is $50,000…..and as quick as I could I said, "SOLD!".

The next week Julie and I hopped a plane for Los Angeles. We dropped the banjo off at the office in Newport Beach and rented a red convertible and drove up Highway One to San Francisco stopping at nice resorts along the way. More importantly, we visited every small guitar store that we could find, spending the money that we had made on more inventory. We bought guitars, banjos, ukuleles and mandolins….Those purchases launched us to a new level in the business. Of course the story doesn’t end there. In 2013 I purchased the banjo back from Mr. Tsumura and sold it again. It now resides in a private collection back in the states. 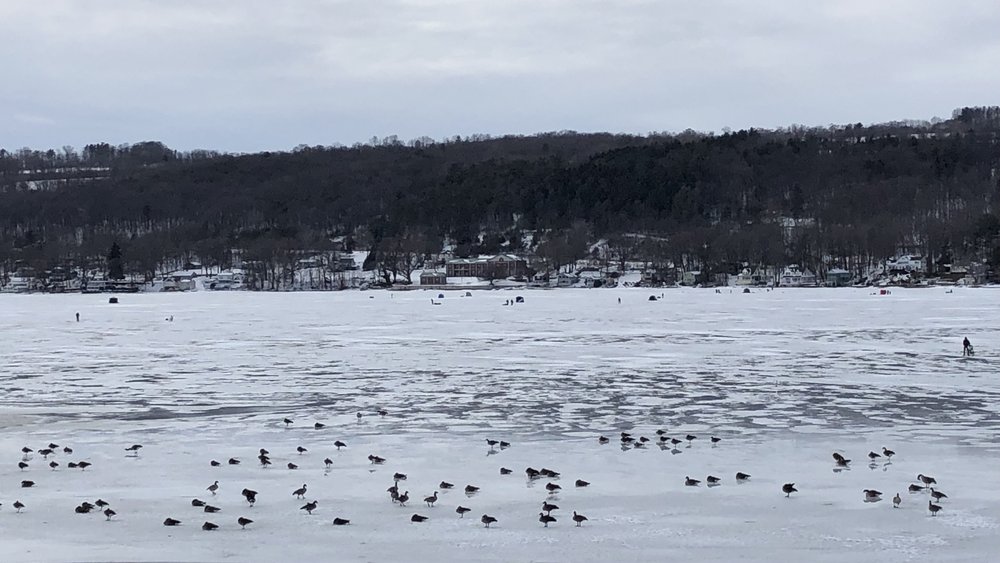 The north end of the Pen Yann branch of Keuka Lake is frozen over. It’s a good place for ice fishing and chasing geese.