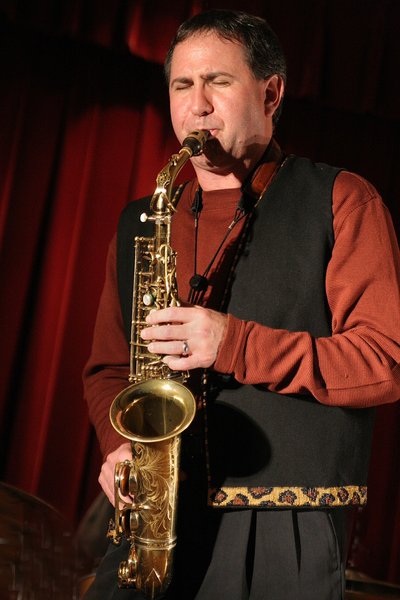 In straight-ahead jazz circles, native New Yorker Dave Glasser is perhaps best known for his extensive work as a sideman for veteran trumpeter/flügelhornist Clark Terry. The alto saxophonist (who shouldn't be confused with engineer David Glasser or classical clarinetist David Glazer) is an unapologetic bebopper; his alto playing owes a lot to the seminal Charlie "Bird" Parker and his disciples (including Sonny Stitt and Gigi Gryce), and he obviously loves the swift, exhilarating bebop chord changes of the '40s and '50s. But Glasser's tone is also influenced by some of the alto players who emerged during jazz's pre-bop, pre-Bird era, including Benny Carter and longtime Duke Ellington associate Johnny Hodges (both of whom were among Bird's influences). Glasser, however, is not a swing revivalist; the Carter and Hodges influence has to do with Glasser's intonation rather than the way he improvises and plays chord changes.

It should also be noted that even though Glasser essentially comes from the Parker/Stitt/Gryce/Phil Woods/Frank Morgan school of bop alto playing, he isn't oblivious to the more subtle and understated players who came out of jazz's cool school. Various reviewers have noted that they hear traces of Lee Konitz and Paul Desmond, two of cool jazz's most important alto saxophonists, in Glasser's playing; that is especially true on ballads and medium-tempo performances. Not everyone who has affected Glasser's tone is a full-time alto saxman; hints of cool-toned tenor sax great Stan Getz (whose greatest influence was the innovative Lester "Pres" Young) and the talented but underexposed Dave Schildkraut can also assert themselves during a Glasser solo. And when one adds up this long list of influences -- Parker, Stitt, Schildkraut, Gryce, Carter, Hodges, Konitz, Desmond, Getz, among others -- the end result is an improviser who isn't innovative or groundbreaking but is still his own man.

Growing up in the Big Apple, Glasser attended the Fiorello H. LaGuardia High School of Music and the Arts as a teenager; he went on to receive a master's degree from the Eastman School of Music in Rochester, NY. Glasser's playing was first documented in 1987, when he was featured on pianist Bill Dobbins' B.D. album on the Equinox label. From 1989-1991, Glasser was a member of the Count Basie ghost orchestra (under the direction of longtime Basie tenor man Frank Foster), and the early to mid-'90s found him serving as the lead alto in tenor honker Illinois Jacquet's band. It was in 1995 that Glasser joined Clark Terry's quintet; another famous bebopper he has played with extensively is pianist Barry Harris. Glasser's first album as a leader came in 2000, when Uh! Oh! was released by the German Nagel-Heyer label. That CD was followed by the saxman's sophomore outing, Dreams Askew, Dreams Anew (which came out on Artemis in 2002 and featured Harris) and 2003's Begin Again, a Chiaroscuro release. Standards: Green and Blue and Above the Clouds both appeared in 2006. Evolution (2009) and Crossover